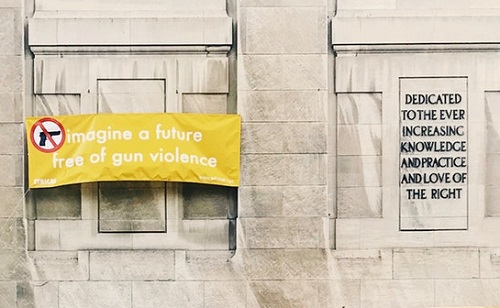 Whether or not to ban guns in America is one of the most contested issues in the United States today. Before I get into this issue, I want to be clear, as a former Akron, Ohio police officer, I believe in the 2nd Amendment. To me the right to bear arms is a fundamental right for all United States citizens. However, my stance on this issue is not “black and white”.

After the Parkland FL school shooting, news outlets were reporting that there have been 18 school shootings. This is simply not true. This number includes incidents where students brought a gun to school but did not become an active shooter. In reality, there have been 5 incidents totaling 26 students killed. Even one incident is too many in my opinion, but the facts have been misrepresented to focus upon the wrong aspect of the issue, “gun control” and not responsible gun ownership. To me this is more attainable than railing against/for an issue that is so sensitive, the right to bear arms.

Another area of contention has been how violent Chicago has gotten despite strict gun control laws. According to a news story on NPR, it’s hard to use this as a definitive argument against gun control laws. Why? Because the states surrounding Chicago, Illinois do not have the same gun laws. State lines do not stop guns and gun violence from making its way into border states. It is up to us to report suspicious behavior, for law enforcement to act on tips and for gun owners to control their firearms.

Gun Violence is Most Prevalent in the U.S.

We are not more violent that other countries, but we have more citizens and therefore more gun owning citizens. Therefore, stating that America is more violent is like comparing “apples to oranges”. Although my source is obviously “pro-gun”, the findings regarding violence in Great Britain has merit.

According to the Buckeye Firearms Association, despite the 1997 Firearms Act essentially banning firearms and making Great Britain a “Gun-Free” country, violence has increased exponentially. In fact, according to a EuroNews.com the murder rate in London surpassed New York’s in February and March 2018.

Another European study by the Crime Prevention Research Center goes on to show Norway as number one and the United States as number twelve on a list of most mass shootings. However, CNN tells a different story, by using different data showing that the U.S. has 25.5 times higher gun homicide rates that other countries. But again, we are focusing upon the wrong issue to really make an impact and protect lives.

Although I do believe in gun ownership and the right for an average, law abiding citizen to carry a concealed firearm, I also believe in proper training and strict safety practices. To get to the heart of the issue to make real change, I recommend we focus upon the following:

Overall, stop focusing upon the same issues (e.g. banning guns and/or gun control), that have no realistic chance of making a difference today or even tomorrow. Let’s put safety first and stop violence at the door before more Americans are hurt or killed.