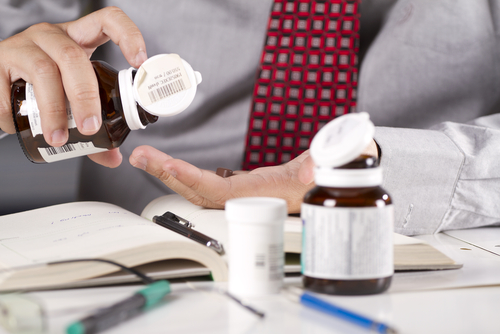 With the growing incidents of opioid abuse in Northeast Ohio, it’s important to remember that you may not have a drug problem, but the person working beside you might. In this blog we will explore the statistics behind the rise in substance abuse and who really pays for employees under the influence. Being aware and knowing the signs are important to both the bottom line and the personal safety of employees.

But first, it is important to understand that someone else’s “personal problem” presents a problem for all they come in contact with on a day-to-day basis, especially at work. Statistics don’t lie. Knowing the percentage of the population that abuses substances is the first step in realizing how much of the problem substance abuse in the workplace can be for all.

Approximately 60% of all illegal drugs are bought and consumed in the United States. This means the chances your coworker could be “on something” are very likely. Below are statistics that drive home how this is everyone’s problem, for employees, management and the organization’s bottom line:

Who Really Pays for Substance Abuse

Substance abuse hurts everyone. There is no such thing as “it’s my problem, mind your own business”. When there are employees using at work, it raises the following questions:

The answer to all of these questions is the organization. Who ultimately “pays the price”? The employees themselves with compromised safety and the ripple effect caused by hits to the organizational bottom line. The money has to come from somewhere and if substance abuse issues are chipping the profits away, ultimately employee paychecks become the logical place to repurpose the lost profits.

As a coworker or manager, you have the ability to stop the madness that is substance abuse in the workplace. There are sure-fire ways to determine if a coworker is abusing a controlled substance.

As opioid abuse continues to spiral out of control in Northeast Ohio, it is important for coworkers and/or managers to be observant. There are signs to watch out for to determine if a coworker is abusing a controlled substance. In Part 2 we will explore the telltale signs of abuse for specific types of controlled substances.

Two of three adults in the U.S. consume alcohol. 10% of drinkers consume half of the nation’s alcohol (beer, wine, liquor).

What to watch out for to detect alcohol abuse (blood alcohol of .05 to .06) in the workplace:

Marijuana is the easiest substance to detect with drug testing. It stays in the system the longest, in some cases for several weeks.. Marijuana is the most common used drug in the U.S.

What to watch out for to detect marijuana abuse in the workplace:

Cocaine is a highly addictive drug. It is the most powerful central nervous system stimulant found in nature.

What to watch out for to detect cocaine abuse in the workplace:

Heroin is derived from morphine, a naturally occurring substance that can be extracted from the seedpods of some varieties of poppy plants. It can be injected, sniffed, snorted or smoked.

What to watch out for to detect heroin use in the workplace:

Methamphetamines are a highly addictive stimulant. Because the “high” from the drug both starts and fades quickly, people often take repeated doses in a “binge and crash” pattern.

What to watch out for to detect methamphetamine use in the workplace:

More employees test positive for prescription drugs than cocaine and methamphetamines combined! Prescription opioid abuse mimics the effects of heroin; the user has an intense feeling of euphoria and pleasure.

What to watch out for to detect prescription drug use in the workplace:

These are visual indicators that a coworker may be abusing a controlled substance. However, there are effective ways to deal with this ever-present problem (i.e. drug testing).

Since it is the obligation of an employer to provide a safe work environment under the OSHA General Duty Clause, employers must be ready to appropriately deal with those abusing drugs. Failure to do so can result in litigation:

Approximately 10% – 15% of employees have drugs/alcohol in their systems. Knowing what to do about an employee who is suspected of abuse is an employer’s best defense. Make sure management is well trained and can:

There are overarching signs to look for in an employee’s behavior that can signal substance abuse. Be sure to watch for:

Make sure to have policies and procedures in place to properly document and confront an employee suspected of substance abuse. A good rule of thumb to remember is “if it is not documented, it did not happen”. Keep it professional and document job performance and/or safety issues ONLY.

Often employees who are abusing drugs at work will refuse to sign disciplinary paperwork. Have a backup. Follow the “Two on One Rule”. Make sure to have an additional manager/supervisor present in these types of cases to document that the employee was provided the paperwork and refused to sign it.

As an employer, it is important to be clear on what is and is not covered by state drug programs.

Which is better, hair or urine testing? Hair testing is often used for pre-employment purposes because it can provide insight into a potential employee’s lifestyle since the results encompass a 30-60 day history. It would not be effective for post accident or reasonable suspicion of substance abuse.

Urine testing is great for knowing whether someone is on drugs currently. It can detect whether someone is abusing a controlled substance within a 3-5 day window (marijuana is the exception with a 30 day window). Urine testing is best used when conducting random drug tests or right after an accident to determine if an employee is under the influence.

Once it is determined that an employee is abusing a controlled substance, be sure to follow established policies and procedures for next steps. Whether the policy is to allow the employee to get clean and return to work or if there is zero tolerance and immediate termination is the organization’s stance, make sure all managers/supervisors are properly trained to follow through. If the employee is displaying aggression or violence, take the necessary steps and involve appropriate law enforcement to ensure the safety of all personnel.

As a former narcotics law enforcement officer, Tim Dimoff applies his firsthand experience with the drug trade to business operations’ best practices. Contact Tim to schedule the Tim’s Talk What to do About Substance Abuse in the Workplace to protect your employees and the organization as a whole from this insidious problem plaguing America’s workplace.Post navigation